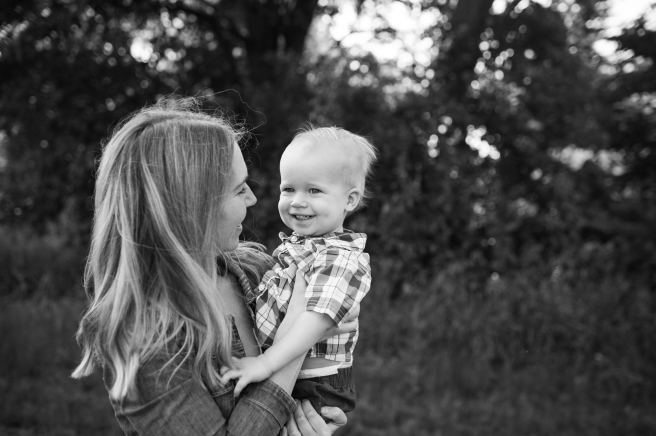 About a month ago in August, after a three-day work trip to Boston, I stopped breastfeeding my son. He was 17 months old, and my husband and I thought this trip was a good opportunity to wean him.  Prior to the trip, he comfort nursed twice a day, in the mornings and evenings. I dropped to these two sessions when Jack turned one–I’d planned to stop when he simply lost interest.

Jack loved nursing, and I did too. Yet over time, it became clear those two feedings were affecting Jack’s sleep. Bedtime wasn’t so bad, but I knew Jack needed me to fall asleep. Mornings, on the other hand, were a challenge. Jack rose every morning at 5 a.m. crying out for me to feed him, a call I loved and hated. I loved starting the day with him. I hated the 5 a.m. part.

On one particularly exhausting morning last spring, I took Jack to back to our bed, positioned him the crook of my arm and elevated his his head, then fed him, blissfully, until we both fell asleep. This became our new routine, and it was something I savored. Early mornings became much easier, until Jack’s wake-up time started creeping from 5 to 4:45 to 4:30 to 4 a.m. By summer it was clear something had to change to remedy the situation.

For months I was so afraid of what was on the other side of weaning. Weaning marked the end of Jack’s babyhood, even though he’d dived into his toddler phase in February, when he took his first steps. Once Jack was weaned our relationship would inevitably shift. In August, it was time for that shift.

The night after I returned from Boston, I led Jack through his usual bedtime routine, skipping his feeding. He’d already experienced three nights like this; I hoped it would seem normal. Standing at the foot of the crib, I cradled Jack and sang him a lullaby, the final step in his routine. He wrestled and craned his neck toward my breasts. “Milk? Milk?” he asked sweetly. My heart dropped.

“Mommy doesn’t have any milk now,” I answered gently.

“Milk? Milk?” Jack asked again, and I shook my head no. He screamed violently. I tried to stay calm, but I could feel the panic rising inside my chest. I put Jack down in his crib; he went ballistic. I picked him up again, he tried to nurse, then cried, so I put him down again. He cried harder. I hated that I couldn’t soothe him with nursing. I worried: Did I wean him too soon? Soon I was crying too–big, heavy tears.

The noise woke my husband, who was asleep in the other room. “Erin, Erin, are you OK?” he called out sleepily. Jack cried. I cried. Jack cried some more.

“No,” I finally blurched. “Help me.” I was so overwhelmed, I wasn’t sure I could last any longer. I wanted to run far away from this baby, this choice, this heartache. I tried to hold Jack and rock him, but he continued to wrestle. On the verge of collapse, I felt my husband’s loving arms encircle my waist. He stood behind me and rocked me–and our son–in his arms. “Shhh” he whispered, urging both of us to relax.

Jack finally fell asleep that night, but I couldn’t. I tossed and turned, plagued with anxiety. I couldn’t stop turning over this choice in my head. Had I made a mistake?

I loved everything about breastfeeding my son: the soothing effect it had on him, the bond it created between us, the feel-good chemicals it created in my body, and heck, the calorie burn was a nice treat. Most of all, I loved that it was a way for Jack and me to start the day together, and to reconnect after a long day, usually spent apart at work and daycare. Now our special time together had ended, and I was full of sorrow and doubt.

Morning came. Some time between 4 and 5 a.m., Jack called “Mommy! Mommy!” I felt so depressed I couldn’t get out of bed. I roused Jay and asked him to take over. I couldn’t do this, it felt too damn painful. Jay helped my son with his morning routine that day. For Jack, that morning and the one that followed weren’t as painful. Morning nursing sessions were easily replaced with breakfast. He had some moments of frustration about the change, but they paled in comparison to what we saw at bedtime.

Some nights I cried, but other nights I got angry. Once I got so angry at Jack for refusing to lay down in his crib I stalked out of his room and slammed the door loudly. “I can’t go back in there,” I fumed. My husband roused himself from bed and finishing putting Jack down.

My whole body, especially my breasts, ached for Jack. My hormones were out of control. I was irritable and grouchy, and also weepy and sentimental. I mourned the change in my relationship with Jack. Would we ever be close again? I kept googling “weaning and depression” and only came up with a few helpful results. I read all of them. I texted my mom friends for advice. I called my mom. I wrote in my journal. I went to yoga.  I allowed myself to feel sad.

A week passed and one day, Jack slept until 6 a.m. When I looked at my phone I could barely believe it. Finally the early rising we’d grappled with for 17 months was righting itself. We had made the right decision after all, I thought, and my heart felt a little lighter.

A silver lining: Reclaiming my time

Jack’s sleep continued to improve, and so did our moods. We were getting along better, learning to connect in new ways. The breastfeeding hormones were leaving my body, and after about two weeks of sadness, anxiety and frustration, I began feeling like myself again. The only thing that hadn’t changed? My body kept rousing itself around 5 a.m. each morning.

I’ve always been a morning person, but after giving birth to my son that shifted due to his schedule and my sleep deprivation. Honestly my whole world shifted when Jack arrived and I never thought I’d be able to reclaim my mornings–until now. I used to get up early to workout, but I had a pretty established evening workout habit these days. What to do with this time?

One of my dear friends is a full-time working mama and prolific, accomplished writer. I’ve always admired how she prioritizes her writing amid her many responsibilities as a manager at work and mother at home. She told me her secret: getting up early a few times a week to fit in writing. When she shared this with me, Jack wasn’t yet one, and I knew it would be a long time until I could try this for myself. At August’s end, I had an epiphany: the time was now.

Thus I began reclaiming my mornings and rising early to write. Replacing something I loved so much–nursing Jack in the morning–with something I love that’s just for me–writing–has been amazing. It helped me let go of the final dregs of sadness about nursing Jack, and it’s helped me move forward in my writing goals. It’s been about a month since I started, and I’ve worked on a handful of writing projects–some to pitch to publications, some to share in this space and on Instagram, others just for me.

I worried I’d lose steam but I haven’t. It feels amazing setting aside this time for myself to do something I love most mornings during the workweek. It’s only an hour or so, but writing in the mornings before Jack’s awake, making time for myself first thing, sets the tone for my entire day. As many mothers know, feeding a child takes a lot of your time an energy, especially when your child is young and you’re on call about every two hours. Now that I’m finally on the other side of breastfeeding,  I’m so grateful Jack and I were able to share that special time together and I’m also delighted to finally reclaim my time for myself. This is a new beginning for me; these writing sessions are my silver lining.

Children grow so quickly–from exclusive breastfeeding to fruit and veggie purees to table foods to weaning, from crawling to toddling to walking to full-out running, from cooing to babbling to words to phrases–and each time Jack grows I continue to be amazed and surprised. Sometimes, like with weaning, the change is especially hard. Other times, like when Jack started talking, I was thrilled.

What I’ve learned from this is that it’s OK to mourn change even while you celebrate a new beginning. Looking back, I can barely believe I breastfed Jack for 17 months. I’m grateful was able to and I’m grateful we had that time together. Although weaning Jack was painful, he is sleeping better, is more independent and we’ve grown to connect in other ways.

Here’s to difficult goodbyes and new beginnings. May you find your silver lining.

Are you an early riser? Have you had a similar experience with reclaiming your time after a major life transition? I’d love to hear from you–message me or comment below.

3 thoughts on “How I coped with weaning my son”

In case you missed it

"Life moves pretty fast. If you don't stop and look around once in a while you could miss it." —Ferris Bueller's Day Off
“Why I write”
Happy Friday, friend! I don't know about you, but I'm thrilled it's end of the week. If we were having coffee today, here’s what I’d tell you:
Today I'm sharing an essay on @coffeeandcrumbs about my recent miscarriage. I wrote this because the stories of other bereaved mothers have helped me heal and honor my sweet baby's life. I pray my words meet readers in their grief and provide peace.
Was it the calm of the lake? Or cotton candy pink saturating the horizon?
Under the shade of an umbrella, my friends discussed the end of the school year. With sweating palms, I gripped the picnic table, trying to listen.
Loading Comments...
%d bloggers like this: